For other non-profits in the area 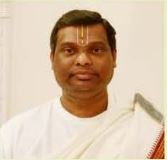 Sri Seshasai Rompicharla is native of Andhrapradesh, India. He comes from a family of Temple Priests. His family members are hereditary priests to this day at Sri Kodanda Rama Swami Temple in Akulamannadu where they perform daily Pujas and services. Seshasai is son Ramanacharyulu and Grandson of Parthasarathi Bhattacharyulu. His grandfather was Asthana Pandit at Tirumala Tirupathi Devasthanam, who was honored by titles like “Sri Vaikhanasa Ratnakara and “Vidwat Kavi Sarvabhowma” by the President of India. Seshasaiji started this priesthood from 1995. He pursued training and study in the theory, practice, and methods of Hindu religious rituals and worship  in Vaikhanasa Aagama. Seshasaiji can perform the Daivika Karyakramas ( related to gods ) like Archana, Abhishekam, Kalyanotsavam etc.. and Manushika Karyakramas ( related to Humans ) like Namakaranam, Annaprasana, Wedding etc.. according to Sri Vaikhanasa Aagama. He has an overall experience of 20+ years. He has ability to conduct daily rituals and special events in Hindu Temples and Hindu family residences. Very well experienced in performing special Alankarams to Deities. He is conversant in Telugu, Hindi, Marathi and English.

Umamaheshwara Shivam was born and brought up in the city of Coimbatore, Tamilnadu, India. He has studied and received training at the Veda Patashalas at Kanchi Kamakoti Peetham in Kanchipuram. He received a scholar’s certificate for his Patashala education in ancient Veda-Dharma, Saivagama, Yajurveda and Jyothisha Sastra. He has become skilled in practicing the traditional form of astrology.  His career includes performing of different Homams, (Havans) like Satha Chandi homam, and Sri Rudra Homam.  He has conducted Vivaha Utsavam, and Deva Prana Prathishtas in many Indian States. Maheswarji has participated in numerous Kumbabhishekam festivals in temples of Malaysia, conducting special rituals during Maha Kumbhabhishekam festivals. Maheswarji on many occasions has performed house Pujas and religious functions like Grahapravesam, Satyanarayana Puja, Wedding ceremonies, Upanayanam, Simantham, Namakaranam, Srardham, and Hiranya Srardham and so on. Maheswarji’s overall experience includes work in India, South-East Asian countries such as Malaysia & Singapore. He is fluent in languages such as Tamil, Sanskrit, Hindi and English.

Sri Gopal Trivedi was born in the city of Vadodara in Gujarat. He has worked as a priest in Samarpan Temple in Philadelphia from 2009 to 2012 and in Sai Temple in Downingtown from 2012 to 2019. He is conversant in Hindi and Gujarati.